In July 2013, I was fortunate enough to visit Kenya and during my time there I visited several tea factories.  One of the factories I visited was the Ngorongo Tea Factory near Kiambu.  Here they make exclusively CTC (Crush Tear Curl) tea.  This was my first experience of a CTC factory as all of the other factories I have visited produce orthodox or artisan style teas exclusively.

Kenya is the world's 3rd largest producer of tea and the largest exporter of black tea.  Domestically, Kenyans only consume around 5-10% of the total amount of tea produced in Kenya and this is usually the lower grades of tea.

The Ngorongo tea factory was built in 1961 by the British and is situated approximately 2500m above sea level.  Currently, the factory produces exclusively CTC teas but the factory manager has stated that he may explore Orthodox tea production in the future.  The top grade of tea produced here is Broken Pekoe 1 CTC or BP1.

The factory has recently been upgraded to a new conveyor belt system to carry out the fermentation/oxidation process.  Before, this was done using small trolleys and required more labour.

Ngorongo uses tea from the gardens around the factory.  When the freshly picked tea arrives at the factory, it is delivered to the withering area first. The factory has 32 withering bins spread throughout two levels. Peak capacity is in February and I visited in July, only the bottom level was in action at the time.  Each bin has the name of the garden that the tea comes from and is processed one at a time.  This means that if any problems arise during processing, the tea can be traced back to the garden or to the batch and can be removed if necessary.

Withering in the bins  involves 6-8 hours of blowing and sucking warm air over the leaves.  The air is adapted depending on humidity and temperature; if the air is too humid, steam is added to make the air better at carrying water.

After withering, the tea is loaded onto a conveyor belt and sent to the cutting machines.

There are 3 steps to the CTC process. Crushing: This breaks down the cell structure to bring together two chemicals which naturally occur in the leaf – polyphenals and flavenols, which cause fermentation. Enzyme polyphenal oxidase reacts with oxygen to speed up the reaction. 3) Curl: The curling brings the very fine particles together into larger granules. After curling, the tea travels along a conveyor with hot air being blown from underneath.  The air adds oxygen and heat which speeds up the reaction.  There are temperature sensors in the bottom but the tea also has be probed regularly to make sure it's between 23-27°C, the optimum temperature for oxidation to take place.

The leaves are then curled more to make bigger granules before going through a second round of oxidation.  By this the time the tea has changed to a light brown colour and looks like sugar. After the second round of oxidation, the tea travels further along the conveyor to the dryers. There are 3 dryers that use cyclones generated from pressure differences to make the tea move from one dryer to another.  The large fibers of the tea start to separate here and gather at the bottom of the third dryer.  The fibers are known as the fannings.  These particular fannings are not used for consumption but, instead of disposing of them, they are bought by companies who use them in material such as asphalt for road surfaces.  The temperature of the dryers is 120 degrees, which sterilizes the tea and kills any microbes. The final part of the process is the sorting.
The tea is sorted using a number of machines connected one after another.  The first machine consists of a series of rollers that roll over felt to pick up a static charge.  This removes all the fiberous material that comes off the tea.  These are also fannings but these ones are smaller and are sometimes used to blend into teabag tea.  There are 3 rollers in this process. The next machine is a series of vibrating sieves used to remove the small grades known as dust: the main grade that is used in teabags.  At the end of this machine the grade that is left is Broken Pekoe.  This used to be the top grade but was downgraded because the size of the leaf was too inconsistent.  The final set of sieves are stacked on top of each other, and these are used to sort the tea into Broken Pekoe 1 (the top grade), Pekoe Fannings  and Pekoe Dust 1.

The teas are then moved into large silos before packing into sacks.  Along the way there are ferrous magnets positioned along the conveyors to make sure there is no metallic contamination to keep in line with international standards.

The teas are tasted every hour for quality control and because the whole process takes two hours
they can check on each batch and remove any batches that are defective. Most of the tea is sent to auction in Mombasa, the world's largest tea auction.  4kg samples are taken from each batch and sent to agents in Mombasa, where they in turn send out 50g samples to their prospective buyers.  Tasting reports made at the factory and by the agents are compared and used to make sure the quality is good enough.  If a buyer likes an invoice they can go to the auction to bid on it.  The factory also trades directly at prices that are set on the averages from the auction.

Ngorongo tea has a particularly sweet taste and is perfect for making milky chai.  We currently don't stock this tea but we might do so in the future. 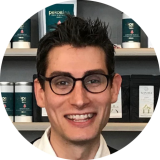 This week we are starting a packaging free weighing out service for visitors to our tea shop in Edinburgh.  Our 20 best selling teas will be available weighed out for you to refill your own container, helping to reduce plastic waste.  What's more, we will be giving a £1 off the total price of each tea purchased packaging free (minimum purchase of 50g for the discount). With the hot weather at the end of June, I have been experimenting with iced tea.  Using our Peach Sencha, some freshly grated ginger and some cloudy lemonade I made this really refreshing drink.

It's really easy to make and a great alternative to alcoholic cocktails. I was inspired to try making scones again after enjoying some home-made scones and tea with my mum in her back garden.  They are really quick and easy to make and are the ideal accompaniment to tea.  This recipe is also sugar free so a good snack to have if you are avoiding excess sugar.  Serve with butter or clotted cream with a nice afternoon tea like Kenilworth Ceylon or the 1903 Blend.